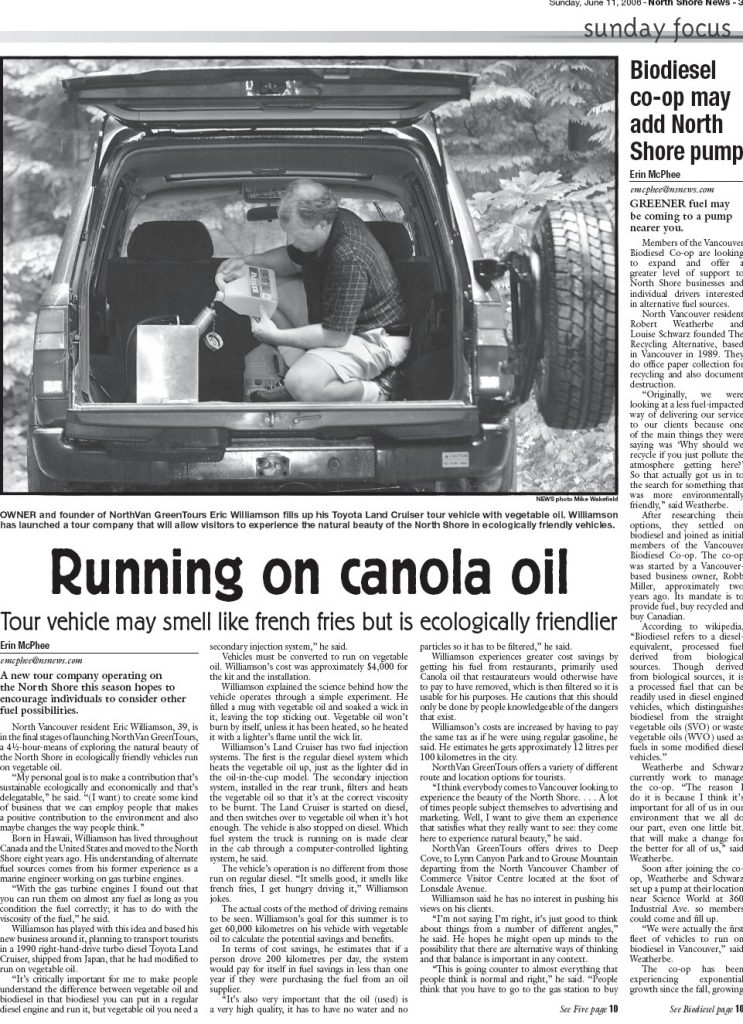 Tour vehicle may smell like french fries, but is ecologically friendlier

A new tour company operating on the North Shore this season hopes to encourage individuals to consider other fuel possibilities.
North Vancouver resident Eric Williamson, 39, is in the final stages of launching NorthVan GreenTours (Now Vancouver Eco Tours), a 4½-hour-means of exploring the natural beauty of the North Shore in ecologically friendly vehicles run on vegetable oil.
”My personal goal is to make a contribution that’s sustainable ecologically and economically and that’s delegatable,” he said. “I want to create some kind of business that we can employ people that makes a positive contribution to the environment and also maybe changes the way people think.”
Born in Hawaii, Williamson has lived throughout Canada and the United States and moved to the North Shore eight years ago. His understanding of alternate fuel sources comes from his former experience as a marine engineer working on gas turbine engines. “With the gas turbine engines I found out that you can run them on almost any fuel as long as you condition the fuel correctly; it has to do with the viscosity of the fuel.” he said.

Williamson has played with this idea and based his new business around it, planning to transport tourists in a 1990 right-hand-drive turbo diesel Toyota Land Cruiser, shipped from Japan, that he had modified to run on vegetable oil.

“It’s critically important for me to make people understand the difference between vegetable oil and biodiesel in that biodiesel you can put in a regular diesel engine and run it, but vegetable oil you need a secondary injection system,” he said.
Vehicles must be converted to run on vegetable oil. Williamson’s cost was approximately $4,000 for the kit and the installation.

Williamson explained the science behind how the vehicle operates through a simple experiment. He filled a mug with vegetable oil and soaked a wick in it, leaving the top sticking out. Vegetable oil won’t burn by itself, unless it has been heated, so he heated it with a lighter’s flame until the wick lit.
Williamson’s Land Cruiser has two fuel injection systems. The first is the regular diesel system which heats the vegetable oil up, just as the lighter did in the oil-in-the-cup model. The secondary injection system, installed in the rear trunk, filters and heats the vegetable oil so that it’s at the correct viscosity to be burnt. The Land Cruiser is started on diesel, and then switches over to vegetable oil when it’s hot enough. The vehicle is also stopped on diesel. Which fuel system the truck is running on is made clear in the cab through a computer-controlled lighting system, he said.

The vehicle’s operation is no different from those run on regular diesel. “It smells good, it smells like french fries, I get hungry driving it,” Williamson jokes.

The actual costs of the method of driving remains to be seen. Williamson’s goal for this summer is to get 60,000 kilometres on his vehicle with vegetable oil to calculate the potential savings and benefits.

In terms of cost savings, he estimates that if a person drove 200 kilometers per day, the system would pay for itself in fuel savings in less than one year if they were purchasing the fuel from an oil supplier.

“It’s also very important that the oil (used) is a very high quality, it has to have no water and no particles so it has to be filtered,” he said.
Williamson experiences greater cost savings by getting his fuel from restaurants, primarily used Canola oil that restaurateurs would otherwise have to pay to have removed, which is then filtered so it is usable for his purposes. He cautions that this should only be done by people knowledgeable of the dangers thar exist.

Williamson’s costs are increased by having to pay the same tax as if he were using regular gasoline, he said. He estimates he gets approximately 12 litres per 100 kilometres in the city.

“I think everybody comes to Vancouver looking to experience the beauty of the North Shore. A lot of times people subject themselves to advertising and marketing. Well, I want to give them an experience that satisfies what they really want to see: they come here to experience natural beauty,” he said.

NorthVan GreenTours offers drives to Deep Cove, to Lynn Canyon Park and to Grouse Mountain departing from the North Vancouver Chamber of Commerce Visitor Centre located at the foot of Lonsdale Avenue.

Williamson said he has no interest in pushing his views on his clients.

“I’m not saying I’m right, it’s just good to think about things from a number of different angles,” he said. He hopes he might open up minds to the possibility that there are alternative ways of thinking and that balance is important in any context.

“This is going counter to almost everything that people think is normal and right,” he said. “People think that you have to go to the gas station to buy… (See Five page)

Unforgettable moments with our
happy guests